Instruction on the Thirteenth Sunday After Pentecost

Pray today at the Introit of the Mass with the, Church against her enemies:
Have regard, O Lord, to thy convenant, and forsake not to the end the souls of thy poor: arise, O Lord, and judge thy cause, and forget not the voices of them that seek thee. O God, why hast thou cast us off unto the end: why is thy wrath enkindled against the sheep of thy pasture? (Ps. LXXIII.) Glory be to the Father and to the Son, and to the Holy Ghost, as it was in the beginning, is now, and ever shall be, world without end. Amen.
COLLECT Almighty and ever­lasting God, give unto us an increase of faith, hope and charity; and that we may obtain that which Thou dost promise, make us to love that which Thou dost command. Through our Lord Jesus Christ Thy Son, who liveth and reigneth with Thee, in the Unity of the Holy Ghost, God, world without end, Amen.
EPISTLE (Gal. III. 16-22.) Brethren, To Abraham were the promises made, and to his seed. He saith not, And to his seeds, as of many, but as of one: And to thy seed, which is Christ. Now this I say, that the testament which was confirmed by God, the law which was made after four hundred and thirty years doth not disannul, or make the promise of no effect. For if the inheritance be of the law, it is no more of promise. But God gave it to Abraham by promise. Why, then, was the law? It was set because of transgressions, until the seed should come to whom he made the promise, being ordained by angels in the hand of a mediator. Now a mediator is not of one: but God is one. Was the law, then, against the promises of God? God forbid. For if there had been a law given which could give life, verily justice should have been by the law. But the scripture hath con­cluded all under sin, that the promise by the faith of Jesus Christ might be given to them that believe.
EXPLANATION St. Paul in this epistle proves to the Galatians who were misled by false doctrines, and ad­hered too much to the Jewish Law, that they could be saved only through a lively faith in Christ, enriched by good works. Therefore he says that the great promises, made by God to Abraham, referred to Christ, through whom all nations of the earth, who would believe in Him, would be blessed and saved. (Gen. XII. 3., and XXII. 18.) The law, indeed, does not annul these promises, since it rather leads to their attainment, yet it must be placed after them because of their advantages, nay, even cease to exist, because the promises are now fulfilled, Christ, the promised Messiah, has really, appeared and liberated man, who could not be freed from their sins by the Jewish law.
ASPIRATION O, let us be grateful for this promise, yet more, how­ever, for the Incarnation of Christ, whereby this promise has been fulfilled. 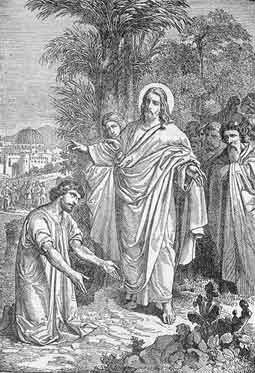 GOSPEL (Luke XVII. 11-19.) At that time, As Jesus was going to Jerusalem, he passed through the midst of Samaria and Galilee: and as he entered into a certain town, there met him ten men that were lepers, who stood afar off, and lifted up their voice, saying: Jesus, master, have mercy on us. Whom, when, he saw, he said: Go, show yourselves to the priests. And it came to pass, that as they went, they were made clean. And one of them, when he saw that he was made clean, went back, with a loud voice glorifying God, and he fell on his face before his feet, giving thanks: and this was a Samaritan. And Jesus answering, said: Were not ten made clean? And where are the nine? There is no one found to return, and give glory to God, but this stranger. And he said to him: Arise go thy way; for thy faith hath made thee whole.
What may be understood by leprosy in a spiritual sense?

1. See the Instruction on Sacrifice on the fifth Sunday after Pentecost, and on Rational Worship on the first Sunday after Epiphany.
Posted by Paul Stramer at 10:10 AM