Why Would You Want to Be a Shareholder in a Bankrupt Corporation?

Let me ask everyone who is aching to vote and eagerly joining political parties and getting all revved up over politics a big, glaring question: why would you want to be a shareholder in a bankrupt corporation?
All that makes you is a mark, as in scapegoat, responsible for its debts.
You thought your taxes were high before? Just wait.
Americans elect fiduciary deputies to make accountable business decisions.
U.S. Citizens and Municipal citizens of the United States vote and thereby give away their proxies as shareholders in their respective governmental services corporations to representatives who aren't accountable to anyone at all.
Why would anyone in their right mind voluntarily do this?
It's a fair question, especially when people now know that both the UNITED STATES, INC. and the USA, Inc., have been run into the ground?
And neither successor organization has a contract with us, so there is no way for them to start the cycle of charge-to-the-moon, go bankrupt, and charge the dumb Americans over again without new negotiation.
Standing there in your stocking-feet, do you have any crazy idea on this planet what you are doing to yourselves by continuing to vote in these foreign, corporate elections?
Instead of tending to your own business and attending your own State Assembly and electing your own fiduciary deputies?
Come on, America, this is not that difficult!
Do you want to be financially responsible for buying solid gold toilet seats for crooks?
If your answer is no, then don't vote in these whiz-bang political party elections. They may be bright and shiny and "exciting" and competitive and all the rest of it, but they are essentially phony substitutes for actual public elections and they result in allowing political lobbyists (think Tobacco lobbyists, Big Pharma lobbyists, Big Oil lobbyists) to access your pocketbook with no accountability and no concern for you.
Political parties are foreign in origin and didn't exist in early America. They only arrived here from Europe about ten years before the Civil War. They became popular with our foreign federal Subcontractors, and in the wake of the war, they substituted their elections for our elections.
Thankfully, not everyone was fooled.
They also made it illegal to vote in their private corporate elections, unless you are adopting their foreign citizenship, too.
So, both from a carrot and a stick standpoint, any American with a brain in their head needs to run like an antelope away from any association with the political parties and these party-based elections and has no reason in this world to step forward and volunteer to be the scapegoat responsible for paying the debts of these run amok foreign governmental services corporations.
----------------------------
See this article and over 3200 others on Anna's website here: www.annavonreitz.com
To support this work look for the PayPal buttons on this website.

Reiner Fuellmich Update: We are starting to win in Courts!!!!

The Vaccine Holocaust Is Well Underway—The War Against Humanity

The world has been ambushed.  We are in the midst of a war against humanity.

Yet most people aren’t aware there is a war going on.

All jurisdictions and instrumentalities must comply
All Federal, Territorial, and Municipal Officers, including all Uniformed Officers, must comply
All hostilities must cease and desist
All Executive Orders issued during and as a result of The American Civil War are set aside
For a larger copy of this document go to:  https://annavonreitz.com/ipp8121.jpg 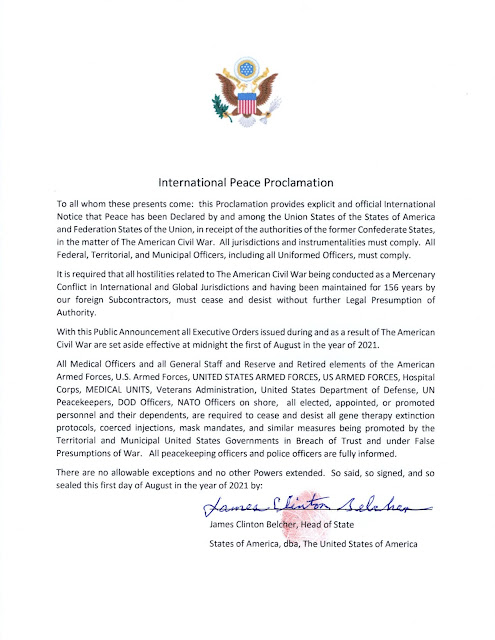