Participating in Your Own Demise -- "Commercial Remedies"

Posted by Paul Stramer at 1:49 PM No comments:

Grasping the Fraud Worked Against You

Second Sunday After Easter Feast of Sts. Phillip and James

Because of the joyous Resurrection of Christ, and the graces flowing to us on account of it, the Church sings at the Introit of the Mass:

INTROIT The earth is full of the mercy of the Lord, alleluia; by the word of the Lord the heavens were established, alleluia, alleluia. Rejoice in the Lord, ye just: praise becometh the upright. (Ps. XXII.) Glory be to the Father, &c.

COLLECT O God, who in the humility of Thy Son hast raised up a fallen world; grant to Thy faithful a perpetual joyfulness; that whereas Thou bast rescued them from the perils of eternal death, Thou mayest bring them to the fruition of everlasting joy. Through &c.

EPISTLE (I Pet II. 21‑25.) Dearly beloved, Christ suffered for us, leaving you an example that you should follow his steps. Who did no sin, neither was guile found in his mouth. Who, when he was reviled, did not revile; when he suffered, he threatened not; but delivered himself to him that judged him unjustly; who his own self bore our sins in his body upon the tree, that we being dead to sins, should live to justice: by whose stripes you were healed. For you were as sheep going astray: but you are now converted to the shepherd and bishop of your souls.

EXPLANATION St. Peter teaches the Christians patience in misery and afflictions, even in unjust persecution, and for this purpose places before them the example of Christ who, though most innocent, suffered most terribly and most patiently. Are we true sheep of the good Shepherd if at the smallest cross, at every word, we become angry and impatient?

ASPIRATION O Lord Jesus! grant me the grace to follow Thee, my good Shepherd, and not to complain and make threats whenever I am reprimanded, reviled or persecuted for justice sake. 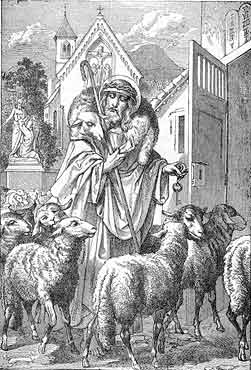 GOSPEL (John X. 11-16.) At that time, Jesus said to the Pharisees: I am the good shepherd. The good shepherd giveth his life for his sheep. But the hireling, and he that is not the shepherd, whose own the sheep are not, seeth the wolf coming, and leaveth the sheep, and flieth; and the wolf catcheth and scattereth the sheep: and the hireling flieth, because he is a hireling, and he bath no care for the sheep. I am the good shepherd, and I know mine, and mine know me. As the Father knoweth me, and I know the Father, and I lay down my life for my sheep. And other sheep I have, that are not of this fold: them also I must bring, and they shall hear my voice, and there shall be one fold and one shepherd.

How has Christ proved Himself a good Shepherd?

By sacrificing His life even for His enemies, for those who did not yet love Him, (I John IV. 10; Rom. V. 8.) and could not reward Him. He has besides given Himself to us for our food.

How are we to know if we are among the sheep of Christ, that is, His chosen ones?

If we listen willingly to the voice of the Shepherd in sermons and instructions, in spiritual books and conversations; are obedient to it, and especially give ear and follow the rules of the Church through which the Good Shepherd speaks to us, (Luke X. 16.) "for he," says St. Augustine, “who has not the Church for his mother, will not have God for his father;" if we gladly receive the food of the Good Shepherd, that is, His sacred Body and Blood in holy Communion; if we are patient and meek as a lamb, freely forgiving our enemies; if we love all men from our heart, do good to them, and seek to bring them to Jesus.

Who are the other sheep of Christ?

The Gentiles who were not of the fold of Israel, whom Christ sought to bring by His disciples, and now by their successors; into His fold. To these sheep we also belonged by our ancestors. O how grateful we should be to God, that He has brought us into the fold of His Church, and how diligently should we conduct ourselves as good sheep!

When will there be but one fold and one shepherd?

When, by the prayers of the Church and by her missionaries, all nations shall be converted to the only saving Church, constituting then one Church under one head. Let us pray that this may soon come to pass.

PRAYER O Lord Jesus! Thou Good Shepherd who on the cross didst give Thy life for Thy sheep, grant us, we beseech Thee, by Thy death, the grace to be faithful to Thy voice and teachings like obedient lambs that we may one day be numbered among Thy chosen ones in heaven.

What has Christ obtained for us by His death?

The remission of our sins, the grace to lead a life pleasing to God in this world, and eternal happiness in the next, for which we now firmly hope, with secure confidence may now expect, and most assuredly will obtain, if we do not fail on our part.

In what does eternal happiness consist?

In the beatific vision of God, which includes the most perfect love of Him, by which those who are saved become, as it were, one with Him, possessing in this union everything that they can possibly desire.

What are the necessary means of obtaining eternal happiness?

The grace of God, that is, His continual assistance; the practice of the three divine virtues: Faith, Hope and Charity; the keeping of God's commandments; the frequent use of the holy Sacraments, and constant prayer. These means must be diligently employed, for "God who", as St. Augustine says, created us without us, will not save us without us," that is, without our cooperation.

What may especially enable us to hope for eternal happiness?

The infinite mercy and goodness of God, who from all eternity has loved us more than an earthly mother, and. because of this love did not even spare His only-begotten Son, but gave Him up, for our sake, to the most bitter death. Will He then deny us heaven, He who in giving us His Son, has given us more than heaven itself? The fidelity of God: He has so often promised us eternal happiness, and in so many texts of Scripture so clearly explained that He wishes us to be saved, that He must keep His promise, for He is eternal truth and cannot deceive. (Heb. VI. 18.) He says not yes today, and no tomorrow, there is no change in Him, nor shadow of alteration. (James I, 17.) The omnipotence of God, who can do all that He pleases, whom no one can oppose or prevent from doing what He will; if we have confidence in a rich and honest man who assures us he will assist us in need, how much more should we hope in the goodness, fidelity, and omnipotence of God!

When should we make an act of Hope?

As soon as we come to the use of reason and, are sufficiently instructed concerning this virtue and its motives; in time of trouble or of severe temptation against this virtue; when receiving the holy Sacraments; every morning and evening, and especially at the hour of death.

The same thing is to be observed in regard to acts of Faith and Love.