Give me Liberty or give me death - unless... 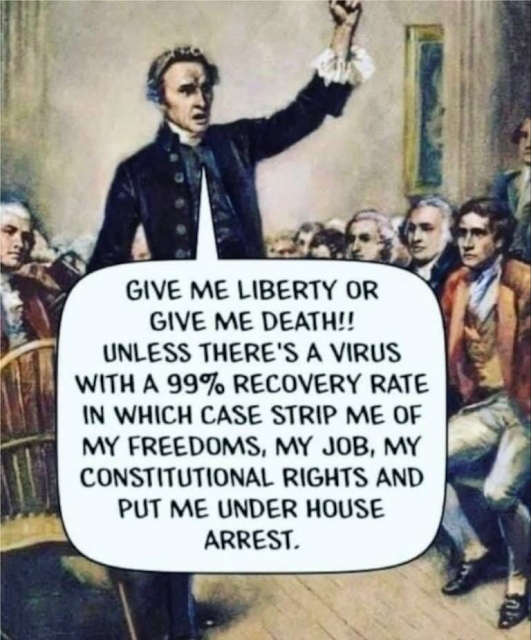 You Loot or Burn, We Shoot To Protect Our Lives and Property

You can stand in the bright light, four-square, self-evident, just being who and what you are, not hiding anything at all, presenting public records and laws and court cases that prove everything you say—- and the Liars among us can’t adjust.They are so used to deceit and subterfuge that their first response to such a person and such a forthright presentation is to guffaw and blurt, “Nah!”If you have been around a few years you will remember that the Liars told you I wasn’t a real person, that I didn’t exist.And then a few of you decided to come to Alaska and ferret out my lair, and by golly! — what’d ya know?  I do exist.Then they told you I was a “Vatican Agent”—- and it turned out that I was a Lutheran who had no dealings with the Vatican at all.Then they told you I was in it for the money and getting rich off selling people stuff—- but it turned out that all my paperwork is available for free and I don’t make any money off my books.  And then there are more Liars of a slightly different kind, and they get on the bandwagon and join our Assemblies and talk it up as if I was their best friend—- as long as they can weasel their ways into positions of trust and bilk the other members.As soon as the Federation discovers their nefarious actions and breach of trust, they don’t have a good word to say about me or the Federation.  Reminds me of the pickpocket who loved me, so long as I let him pick my pockets.And yet, these same people, having shown their true colors, will have the audacity to act hurt when they are caught —and pretend that they are the victims instead of the spoilers.I had it happen again twice this past week.Former leaders of dissolved Assemblies making threats and refusing to settle down until I pointed out that we have tapes of them bad-mouthing me and the Federation while purportedly working for me and the Federation.Well, obviously, they were working for something and someone, but it wasn’t me and it wasn’t the Federation of States, either. Just more charlatans pretending to be what they are not, acting in breach of trust—- as if we haven’t all seen enough of that already.In all these actions and examples, someone was lying about something and it wasn’t me.Take a hint.  When you see someone who is supposed to be working with me and the Federation of States, and, at the same time, they are bad-mouthing me and the Federation—- you are looking at a bad hombre.You are looking at a liar and a deceiver.You are looking at someone who is not trustworthy and someone who is not who they say they are. By definition.You should, reasonably, note the facts and jog away, because if they will betray me, they will betray you.  If they bad-mouth the Federation, they will bad-mouth your State of the Union, which is a Member of the Federation.  If they will lie about one thing, they will lie about others.The world is full of shiftless, deceitful, power-mongering, dishonest cads, people who are forever chiseling some angle, playing some role, and pretending to be one thing, while acting as another.So don’t waste your time listening to what they say.  Instead, watch what they do.And deal with them accordingly. Speak up and observe how they are back-biting and bounce them right back onto the street.Our Assemblies need honest, loyal, serious-minded Americans.  We don’t need or want anything else.Gossips, control freaks, back-biters, politicians, two-faced liars, and others of bad character belong in a district assembly— not a State Assembly.  Feel free to tell them so.
----------------------------
See this article and over 3400 others on Anna's website here: www.annavonreitz.com
To support this work look for the Donate button on this website.