8 "Facts" About Coronavirus that are absolute Lies

Have you ever pondered the fact that the current COVID lockdown, masks, and fear may be a result of official “facts” that are not facts at all but are, well, actually lies?
In our opinion, the propaganda campaign surrounding this so-called “pandemic” has achieved its goal. Inundated with voluminous amounts of contradictory information coming from all angles, people in general have succumbed to “analysis paralysis,” confusion and fear.
There are several official “facts” which have led to this insane state of fear and irrational and illogical recommendations about COVID, and in this article, we’re going to prove, without a shadow of a doubt, that they are lies. 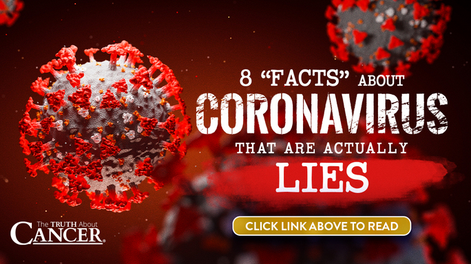 https://thetruthaboutcancer.com/8-facts-actually-lies/
Posted by Paul Stramer at 9:38 AM 8 comments:


Get a clue.  They can't even prove that a separate virus called "Covid 19" exists.

So they can't prove that "Covid 19" causes any particular special or worse form of the Common Cold, either.

Pretty good trick, no?  You tested positive for an imaginary disease.

It's not hard to understand.  Everyone, and I do mean, everyone, has had the Common Cold at some time in their life.

And that is what the Corona virus is.  The Common Cold.  So of course, we all "test positive" for corona virus antibodies.  Ya think?

The whackjob idiots "declared war" on the Common Cold, just like they "declared war" on poverty, on drugs, and God only knows what else, so that they could carry on a perpetual "war" on our shores, to our detriment.

And lots more whackjob idiots have fallen for it and put up with this $@%@#$ because they "believed" this crap.

Believe Mike Pompeo when he called it a "live exercise".

But there's no fire---except in your mind, because you've been lied to by "authorities" you trusted.

So now Mr. Trump is in a hard spot.  If he admits being duped, he looks like an incompetent fool whose bought the lies of an "intelligence community" that hates his guts, because he actually has tried to drain their swamp.

But if he doesn't come clean, the Swamp wins.  Double or nothing.

Anyone with brains enough to figure out a Third Option?  A solution that doesn't involve yet another war?

How do we use your donations?  Find out here.
Posted by Paul Stramer at 8:03 AM 30 comments:

About Oaths and Constitutions


Americans, being Lawful Persons living under a Public Law that uses The Ten Commandments as its basis, don't take Oaths.  As a quick look in any edition of the Geneva Bible will prove, all the indictments against "persons" are self-evident, so we instead act as "people".

This does not mean that everyone else worldwide chose our path and made this distinction: far from it.  There are numerous other governments and indeed, entire jurisdictions of law, that operate exclusively of, for, and by persons --- not people.

I have often observed that the International and Global jurisdictions of law operate exclusively using "persons" - and that even our Lawful Persons known as People -- with a capital "P" -- are unincorporated fictional entities. There are no living people of any kind operating in any international or global jurisdiction.

These are literally the realms of the dead.

Americans, alive or "dead", operating as living people or as Lawful Persons, either one, don't take Oaths to anything, because of the Biblical injunctions against it; we offer only Public Acknowledgements known as "Affirmations of Office" instead, in which a successful candidate or appointee formally and in public accepts the duties of their office and promises to discharge the Public Duty to the best of his or her ability.

All the Oath-taking occurs from the other "lane" -- or, if you like to think of it, the other side of the fence, in the realm of our other public employees, who work for us indirectly via delegation of our Powers to the British Monarch and the Pope.

British Territorial Merchant Seamen and Admiralty and Maritime Judges and Military Officers and Inductees of all stripe all take Oaths to their working contract, The Constitution of the United States of America, because nothing is more sacred to them than their paycheck and basis of authority.  Because their "law"-- Federal Code -- has nothing to do with the True God, they willingly take oaths and think nothing of it.

Ditto the Federal Civil Service.  You might think of them as a third lane on the highway of life and death, with the living people in the right lane and the dead "persons" running along in the opposite two lanes. [The way is wide and easy for them.  They even have a passing lane.] They take oaths to their rice bowl, The Constitution of the United States, and think nothing of it.

Other than being their meal-ticket and source of their purported authorities, why should they take the Constitutions seriously?

They have re-defined and evaded their duties owed under the Constitutions for years, and successfully bilked their American Employers for generations, simply by redefining Americans as Federal citizens and "conferring" such citizenship responsibilities upon the slumbering herd.

Meanwhile, the Americans have slept on unaware of all the guile and deceit lurking behind the facade of "the federal government" and have readily accepted the supposed authority of these foreign corporations and their private courts and their practice of taking vain oaths, falling into line and pursuing these same practices like so many lost ducklings despite Matthew 5:34-37.

Hello?  All you Christians working for the "governmental services corporations" out there?  Taking oaths, are you?

It has lately become the rage for all sorts of well-meaning people to go on YouTube and film themselves taking all sorts of patriotic oaths.

They are blindly, innocently, reciting the "Pledge of Allegiance" which is a feudal act of a serf subjecting himself to a liege lord, -----and in this case, subjecting themselves body and soul to a borrowed flag being abused by the British Crown Corporation; or, like General Michael Flynn, reciting the military oath to "protect and defend against all enemies both foreign and domestic".

Americans acting in their capacity as Americans don't take oaths.

It's only when they cross over the line and take service with the foreign governmental services corporations that they take oaths.  And if Americans did take oaths, they would certainly not take oaths to anything as venal as an employment contract -- that is, to any Constitution.

Yes, my children, that is really all that a "Constitution" is.

It's a services for hire contract that sets forth who or what is providing the service, the limitations they have when providing that service, and who pays for the service.  It's not some sacred cow and its not the "source" of your rights.

All the rights discussed in the Bill of Rights attached to the Constitutions don't scratch the surface of your natural and unalienable rights as a living man or woman and those rights don't come to you from the hands of men, but from the hands of your Creator, the Living God.

No, the Bill of Rights should be renamed as the Bill of Guarantees, because this is what is contractually guaranteed.

And you haven't even enjoyed that much of your inheritance, because your shiftless foreign employees have endeavored to mistake you as one of them, and to wage surreptitious "war" against you and among themselves for the better part of two centuries.

Wake up, my dears, wake up.  The alarm bells are ringing.  Take no oaths at all and instead commune with the Living God within you.


How do we use your donations?  Find out here.
Posted by Paul Stramer at 7:52 AM 4 comments: