Posted by Paul Stramer at 10:26 PM No comments:

(Natural News) Intel is coming in today from many sources, and I will likely need to post a separate article to cover it all. Importantly, Trump has not conceded anything, and if you parse the words of his most recent video statement, there is absolutely no concession in it and no naming of Joe Biden as president:

A new administration will be inaugurated on January 20th. … my priority is to ensure a smooth, orderly and seamless transition of power. This moment calls for healing and reconciliation.

But why would Trump still be refusing to concede while trying to make people think he’s conceding? Because according to one source that has briefed me, the globalist controllers are threatening to detonate dirty bombs in every US state representing a senator who voted against the Biden slate of electors. The threat against Trump is that if he does not concede, the dirty bombs will be set off, killing hundreds of thousands of Americans.

Yet Trump fully realizes that far more American would die under the totalitarian communist-run regime represented by Joe Biden. Trump isn’t going to be threatened into quitting.

In fact, as I cover in today’s podcast, Trump is in a secure location and he’s fighting from there, alongside loyal forces of the US military who are preparing for decisive action against the deep state traitors who are desperate to remove Trump from power by any means necessary.

Nancy Pelosy, who will obvious face arrest and prosecution for treason if Trump secures his second term, is running around D.C. like a crazed hyena, trying to get Pence to invoke the 25th Amendment to remove Trump immediately. An impeachment “trial” is scheduled for Monday to try to remove Trump by other means, claiming that Trump still has access to the nuclear codes and might unleash a nuclear missile.

This morning, I spoke to the Chairman of the Joint Chiefs of Staff Mark Milley to discuss available precautions for preventing an unstable president from initiating military hostilities or accessing the launch codes and ordering a nuclear strike…

In other words, Pelosi is conspiring with Mark Milley — also a traitor — to remove Trump from power before he can complete his counterinsurgency actions involving the military.

The deep state is trying to thwart Trump from every possible angle, and Trump’s victory isn’t assured, but he remains the US President for the next 12 days, and he’s using those days to carry out an epic counterattack against the criminals who rigged the elections, staged the “siege” on the capitol building, and plan to tear down our constitutional republic if they gain control of the White House.

Victory Update: What Happened in D.C. with Sarah Palin

This was forwarded from one of our readers of this blog:
Friends and Associates:
Fakestream Media continues to manipulate the world into thinking the U.S. Capitol insurgency was the fault of President Trump, calling for the 25th amendment, while Schumer and Pelosi et al are pushing the DoJ to go after Trump for inciting a riot to overthrow the government.
THEY are saying that all MAGA / Trump supporters are now "Domestic Terrorists," especially "Q-Anon followers."
The hypocrisy by the communist left is over-the-top as NOTHING was said by these bastards about ANTIFA / BLM fire and destruction on the streets of America.
What THEY are not wanting the fakestream media to talk about is....WE in the Patriot Movement have the intel and WE know that ANTIFA led the MAGA cattle to a deadly slaughter at the Capitol. WE all have the footage and intel on two particular ANTIFA thug leaders. See Video...
The American public are being hoodwinked by the communist force that continues their coup against President Trump.
Trump MUST prevail and if he has NO support in-order to begin massive arrests of all TRAITORS, then at least...HE MUST expose, expose and expose the foreign interference and traitors aiding and abetting the Chinese Communists.
Word tonight is that Pelosi's laptop was grabbed and shows emails with ANTIFA leaders. NOT CONFIRMED.
I am also seeing reports from credible sources, a U.S. military operation (during the night) was conducted in Ukraine, a raid of a known Biden (owned) building and some very disturbing items and black tar heroin was seized.
The next couple of weeks could further entice the mental trip we're all experiencing...WE ARE AT WAR.
Regardless of what Trump finally has to do, which WE might NOT agree with, the revolution and resistance against an illegal government will not end, but will become extremely dangerous, but righteous and our duty under the U.S. Constitution.
---Dave Bertrand
Here is another longer video that shows a lot more:

Vid’s a bit long but shows police escorting 4 white vans full of antifa pukes to the capitol area, and that’s just the beginning.

EP. 2372B-SHOT HEARD AROUND THE WORLD,IT HAD TO BE THIS WAY,THE CRIME OF TREASON HAS BEEN COMPLETED

The patriots needed to wait until the crime was committed. On live TV the senate, house, MSM and SM pushed forward their crime of treason. They [knowingly] stole the election. The crime of treason has been completed. The storm is coming, All of the pieces are in place. Trump has tried everyone avenue, he went to the lower courts, the state supreme court, the supreme court of the US. The swamp blocked him at every turn. We knew this day would come, it had to be this way, sometimes you must walk through the darkness to see the light.
Click the link at the top for the whole story.
Find the PayPal buttons on this blog and help us keep bringing you all the real news on time and Anna's comments on the real America we all want to prevail.
Posted by Paul Stramer at 8:38 AM 4 comments:

Trump has all the evidence now with the list of traitors.
Posted by Paul Stramer at 8:22 AM 7 comments: 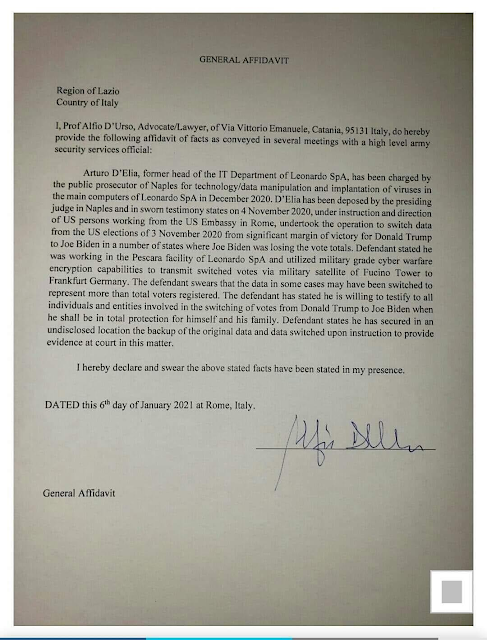