By now, we've all heard the appalling and "official" evaluations coming out of China as confirmed by Western military and Special Ops programs.

The Nipah Virus unleashed in China has laboratory mortality rate of 45-75%, but, for unknown reasons, is only killing about 15% of victims in real life. This is still an incredible number of lives lost, approximating the entire population of the United States being wiped out.

Imagine everyone you know, together with their hopes and dreams, their skills, their love affairs, their quirks, their sense of humor, their pet peeves--- think of them all dying over the period of a few months.  Think of what it would be like in terms of disruption to families and work routines and even just dealing with all the dead, but still infected, bodies?   No way to even give them a decent traditional burial.

Yes, of course, China will be "devastated", and hardly anyone will be left untouched.  Their export markets will be interrupted and their factories shut down for months, at a minimum.  Their export facilities and packaging systems will have to be super-sanitized to insure that the deadly virus is not being exported along with widgets, and everyone concerned will have to be satisfied that its safe to trade with China again.

But as bad as this is, it was meant to be far worse. The Perpetrators bragged that they foresaw a 45-75% mortality rate.  They meant to take out at least a billion people in China alone-- an act of genocide on an unprecedented scale.

Meanwhile, the vermin responsible will seek to benefit themselves by having the patent to the only two drugs known to kill the virus.

This is far from the first time that we have observed their use of the Hegelian Dialectic to benefit themselves --- create a problem, and then profit by providing the solution.

It is not the first time we have seen this shocking, diabolical, mean-spirited, cynical, criminal process in action, but it should be the last time, if we have the sense of rabbits.

The Bill and Melinda Gates Foundation has the whole spectrum of the process sewn up --- the patent on the virus and the drugs to combat it.  We can safely assume that they are involved at the very root of this problem, and we have the means of stripping the patents from them.

There are many evil men who sit in our corporate board rooms and think that they are immune from the Public Law, safe and insulated from any retaliation, ever, at all.

That's what they think.

So, think some more yourselves.

When was this unleashed?  A few days after Trump and China inked a new independent Trade Deal that didn't allow the rats to profit and manipulate things, and which didn't require the Chinese Government to kickback its exchange rate profits to the Rothschild Central Banks.

Trump and the U.S. Military-Industrial Complex had no reason to undermine this happy resolution to mutual problems.  China had even less reason to do anything to obstruct a full-steam ahead trade relationship with the United States of America.

When the dust settles, you will see that the guilty parties are, once again, rogue elements in the CIA working with rogue elements in the British M16, funded by the Usual Suspects including the Bill and Melinda Gates Foundation, and all operating under the conveniently named, "Umbrella Corporation" ---- aka, the business arm of The Trust.

And they do have reason to obstruct the new United States of America - China Trade Deal, because it undermines their hegemony and control of trade policies and currency markets. So they are taking their revenge and obstructing the Trade Deal at the same time they are promoting their business interests and venting their insane population control agenda.

Now, look at the "Umbrella Corporation" logo.  It looks like you are looking down on the top of an open red and white alternating-sectioned umbrella, but what else does it look like?  The equal-armed Maltese Cross.  And the equal-armed Maltese Cross, also known as the "World Cross" is the emblem of what?  The reptilian Dragoons, the old military caste, the Aryans (Orions) that "from Heaven to Earth came".  It is not Christian. It far pre-dates Christianity.

And yes, it does represent what we call an "umbrella" corporation, a single corporation that controls many other corporations, also known as a Holding Company Corporation, too.  Over 700 of the world's largest corporations have all been linked together by a single interlocking trust directorate, all operating under the more-or-less concerted direction of the Roman Curia.

By evoking the concept of an umbrella they trick you into seeing their logo as the top of an umbrella, instead of shifting gears just a tiny bit, and seeing the logo for what it is--- an open representation of the Maltese Cross and the co-opting Death Cult pagan religion that has secretively sheltered in the Roman Catholic Church for centuries. 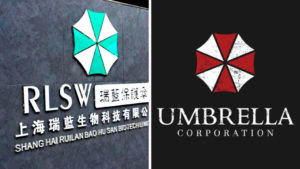 Take a good look and you will see the Maltese Cross, not the top of an umbrella.
Posted by Paul Stramer at 7:21 PM