Instruction on the Fifteenth Sunday After Pentecost

The Introit of the Mass is a fervent prayer; which may be said in every necessity and adversity:

INTROIT Bow down thine ear, O Lord; to me, and hear me: save thy servant, O my God, that hopeth in thee: have mercy on me, O Lord, for I have cried to thee all the day. Give joy to the soul of thy servant: for to thee, O Lord, I have lifted up my soul. (Ps. IXXXV.) Glory be to the Father and to the Son, and to the Holy Ghost, as it was in the beginning, is now, and ever shall be, world without end. Amen.
COLLECT Let Thy continued pity, O Lord, cleanse and defend Thy Church: and because without Thee it cannot abide in safety, govern it ever by Thy gift. Through our Lord Jesus Christ Thy Son, who liveth and reigneth with Thee, in the Unity of the Holy Ghost, God, world without end, Amen.
EPISTLE (Gal. V. 25, 26.; vi. I-Io.) Brethren, If we live in the Spirit, let us also walk in the Spirit. Let us not be made desirous of vain-glory, provoking one another, envying one another. Brethren, and if a man be overtaken in any fault, you, who are spiritual, instruct such a one in the spirit of meekness, considering thyself, lest thou also be tempted. Bear ye one another's burdens, and so you shall fulfill the law of Christ. For if any man think himself to be something, whereas he is nothing, he deceiveth himself. But let every one prove his own work, and so he shall have glory in himself only, and not in another. For every one shall bear his own burden. And let him that is instructed in the word, communicate to him that instructeth him, in all good things. Be not deceived; God is not mocked: for what things a man shall sow, those also shall he reap. For he that soweth in his flesh, of the flesh also shall reap corruption: but he that soweth in the spirit, of the spirit shall reap life everlasting. And in doing good, let us not fail: for in due time we shall reap, not failing. Therefore, whilst we have time, let us work good to all men, but especially to those who are of the household of the faith.
EXPLANATION This epistle is taken, like that of the Sunday before last, from the epistle of St. Paul to the Galatians, in which St. Paul shows them the insufficiency of the Jewish law, and that they can only be saved by a lively faith in Christ, but now he admonishes them to the performance of good works. You now live, he tells them, in the Spirit, that is, the Holy Ghost animates your heart by His grace, enlightens, confirms, and inflames you, admonishes and teaches you, impels your heart to do good; you must, therefore, also regulate your external conduct accordingly, and in particular devote yourself to the practice of humility and charity, as the foundations of a truly spiritual life. Humility must teach and move you to think little of yourself, to avoid vain glory, and not to confide in your own strength. But charity should impel you to be meek and compassionate to all, even sinners, to correct them charitably, and lead them back to the path of virtue; since he who is harsh to the erring, despises and treats them roughly, is often permitted by God to fall into the same, nay, even into greater sins.
Particularly you must show your charity one for another, that one bears the burdens of the other: that you bear the faults and imperfections of others just as patiently as you wish others to bear with your own imperfections; thus you will fulfill the law of Christ, which commands us to love our neighbor; you will prevent many sins which are occasioned by considering yourself perfect, raising yourself above others, criticizing their failings, and causing disturbance. True glory consists in knowing ourselves, our faults and evil inclinations, and in eradicating them. Be grateful to those who instruct you in the word of God, and give to them willingly of your earthly possessions. What you sow, you shall reap; if you only follow the dictates of the flesh, do not mortify yourself, do not correct your failings, and indulge your sinful appetites, you will one day reap death, destruction and damnation, whereas, on the contrary, if you follow the dictates of the Holy Ghost, you will reap of the Spirit of life.
Let us obey this doctrine, for it is of interest to us, and impress deeply on our heart that without mortification of body and soul we cannot be saved.
ASPIRATION. O. St. Paul! beg of God the grace for me, that I may always walk in humility, and the love of my neighbor, particularly in bearing with his imperfections and failings, and thus fulfill the law of Christ in this as in all things. 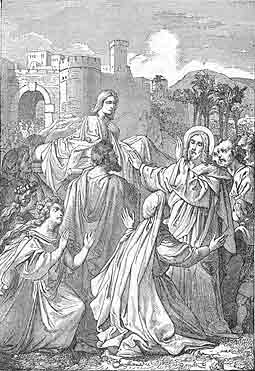 
In order to express her horror for the crimes perpetrated by them, and to deter the faithful from committing similar actions.
Posted by Paul Stramer at 9:20 AM

Email ThisBlogThis!Share to TwitterShare to FacebookShare to Pinterest
Labels: Anna von Reitz, Instruction on the Fifteenth Sunday After Pentecost