At the Introit of the Mass pray with the priest for the forgiveness of your sins: If thou shalt observe iniquities O Lord: Lord, who shall endure? for with thee is propitiation, O God of Israel. From the depths I have cried to thee, O Lord: Lord, hear my voice. (Ps. CXXIX.) Glory etc.
COLLECT O God, our refuge and strength, who art the author of all goodness, hear, we beseech Thee, the devout prayers of Thy Church, and grant that what we faithfully ask we may effectually obtain. Thro’.
EPISTLE (Philipp. I. 6-II.) Brethren, We are confident in the Lord Jesus, that he who hath begun a good work in you will perfect it unto the day of Christ Jesus. As it is meet for me to think this for you all, for that I have you in my heart, and that in my bands, and in the defence and confirmation of the gospel, you are all partakers of my joy. For God is my witness, how I long after you all in the bowels of Jesus Christ. And this I pray, that your charity may more and more abound in knowledge and in all understanding: that you may approve the better things; that you may be sincere and without offence unto the day of Christ, filled with the fruit of justice, through Jesus Christ, unto the glory and praise of God.
EXPLANATION
This epistle was written by St. Paul at Rome, where he was imprisoned for the faith, to the inhabitants of Philippe in Macedonia whom he had converted to the true faith. He congratulates them that they so willingly received and conscientiously obeyed the gospel which he had preached to them, and he says, he trusts in God to complete the good work which He has commenced, and to give them perseverance until the day of Christ, that is, until death. 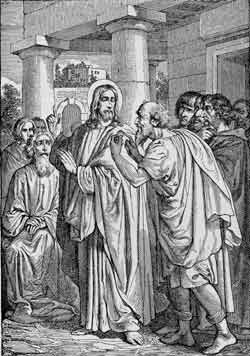