INTROIT The Lord saith: I think thoughts of peace, and not of affliction: you shall call upon me, and I will hear you: and I will bring back your captivity from all places. (Fer. XXIX. 11. 12. 14.) Lord, thou hast blessed thy land: thou hast turned away the captivity of Jacob. (Ps. LXXXIV.) Glory be to the Father and to the Son, and to the Holy Ghost, as it was in the beginning, is now, and ever shall be, world without end. Amen.
COLLECT Quicken, we beseech Thee, 0 Lord, the wills of Thy faithful: that they, more earnestly seeking after the fruit of divine grace, may more abundantly receive the healing gifts of Thy mercy. Through our Lord Jesus Christ Thy Son, who liveth and reigneth with Thee, in the Unity of the Holy Ghost, God, world without end, Amen.
EPISTLE (Col. I. 9—14.) Brethren, We cease not to pray for you, and to beg that you may be filled with the knowledge of the will of God, in all wisdom and spiritual understanding: that you may walk worthy of God, in all things pleasing, being fruitful in every good work, and increasing in the knowledge of God: strengthened with all might according to the; power of his glory, in all patience and long-suffering with joy, giving thanks to God the Father, who hath made us worthy to be partakers of the lot of the saints in light; who hath delivered us from the power of darkness, and hath translated us into the kingdom of the Son of his love, in whom we have redemption through his blood, the remission of sins.
EXPLANATION In this epistle St. Paul teaches us to pray for our neighbor, and to thank God especially for the light of the true, only saving faith. Let us endeavor to imitate St. Paul in his love and zeal for the salvation of souls, then we shall also one day partake of his glorious reward in heaven. 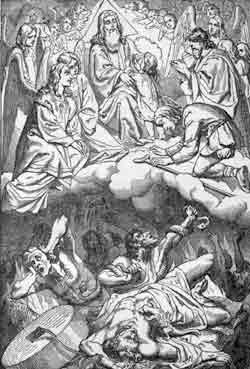