INSTRUCTION ON THE FESTIVAL OF THE ASCENSION OF OUR LORD

At the Introit the Church sings the words which were spoken by the angels to the apostles and disciples, after the Ascension of our Lord:
INTROIT Ye men of Galilee, why wonder you, looking up to heaven? allel.: He shall so come as you have seen him going up into heaven. Allel., allel., allel. (Acts I. 11.), Oh, clap your hands, all ye nations; shout unto God with the voice of joy. (Ps. XLVI. 2.) Glory be to the Father, etc.
COLLECT Grant, we beseech Thee, O Almighty God, that we who believe Thy only‑begotten Son, our Redeemer, to have this day ascended into the heavens, may ourselves also in, mind dwell amid heavenly things. Through the same etc.
LESSON (Acts I. 1-11.) The former treatise I made, O Theophilus, of all things which Jesus began to do and to teach , until the day on which, giving commandments by the Holy Ghost to the apostles ,whom he had chosen, he was taken up: to whom also he showed himself alive after his passion, by many proofs, for forty days appearing to them, and speaking of the kingdom of God. And eating together with them, he commanded them that they should not depart from Jerusalem, but should wait for the prom­ise of the Father, which you have heard (saith he) by my mouth: for John indeed baptized with water, but you shall be baptized with the Holy Ghost, not many days hence. They, therefore, who were come together, asked him, saying: Lord, wilt thou at this time restore the kingdom to Israel? But he said to diem: It is not for you to know the times or moments which the Father hath put in his own power; but you shall receive the power of the Holy Ghost coming upon you, and you shall be witnesses to me in Jerusalem and in all Judea, and Samaria, and even to the uttermost part of the earth. And when he had said these things, while they looked on, he was raised up; and a cloud received him out of their sight. And while they were beholding him going up to heaven, behold, two men stood by them in white garments, who also said: Ye men of Galilee, why stand yon looking up to heaven?
This Jesus who is taken up from you into heaven, shall so come, as you have seen him going into heaven.
EXPLANATION This gospel of St. Luke addressed to Theophilus, a Christian of note in Antioch, contains an account of the life, sufferings, and death of Jesus up to the time of His ascension into heaven. The Evangelist con­tinues his account in the Acts of the apostles, in which he describes in simple words that which Jesus did during the forty days following His Resurrection, and the manner in which He ascended into heaven in the presence of His apostles. Rejoice that Christ today has entered into the glory gained by His sufferings and death, and pray: I rejoice, O King of heaven and earth, in the glory Thou bast this day attained in heaven. Sing to God, ye kingdoms of the earth: sing ye to the Lord: sing ye to God, who mounteth above the heaven of heavens to the east. Give ye glory to God for Israel, his magnificence and his power is in the clouds. God is wonderful in his saints, the God of Israel is he who will give power and strength to his people, blessed be God. (Ps.LXVII. 33‑36.) 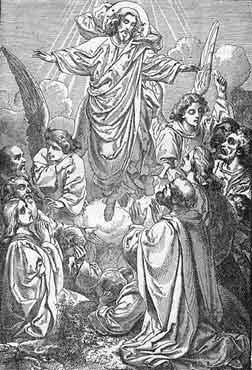 And these signs shall follow them that believe.(Mark XVI. 17.)
What is a miracle?
A miracle, as defined by St. Thomas of Aquin, is any­thing beyond the ordinary, fixed state of things that is done through God. Thus when the sun stands still in his course, when thousands are fed with five loaves and two small fishes, when by a word or simple touch the dead are raised to life, the blind see, and the deaf hear, these are things contrary to nature, and are miracles which can only be performed by God or those persons to whom God has given the power.
That God can work miracles, cannot be denied. God has made the laws of nature, and at any time it pleases Him, He can suddenly suspend them, and that God has at times done so, we have more solid and undeniable proofs, than we have for the most renowned and best authenticated facts of history, far more witnesses testify to miracles, the whole world has believed them, and been converted by them; more than eleven millions of martyrs have died to confirm and maintain their truth; no one gives up his life for lies and deceptions; the Jews and pagans have admitted them, but ascribed them to witchcraft and the power of demons rather than to God; by this they proved and acknowledged the truth of miracles, because in order to deny them, they were driven to false and absurd explanation of them.
Can men work miracles?
No; only God works miracles through man to whom He gives the power. The history of the Christian Church in all ages bears testimony, that men have wrought miracles in the name of Jesus, as, for example, the apostles and the saints.
Can miracles be worked by the relics of saints, pictures, &e.?
The Church, in the Council of Trent, solemnly declares, that we are never to believe that there is in any picture or relic any hidden power by which a miracle can, be worked, and that we are not to honor or ask any such thing of them. Therefore no miracle can ever be worked by them, but God can perform miracles through them, and He has done so, as the holy Scriptures and the history of the Church of Christ both prove. But when through certain pictures (usually called miraculous pictures) miracles do take place, that no deception may occur, the Church commands that such a picture shall not be exposed for the veneration of the faithful, until the truth of the miracles performed is by a rigorous examination established beyond doubt; she then causes such pictures to be respectfully preserved as monu­ments of the goodness and omnipotence of God.
Why are there not so many miracles in our ties as there were in the first days of the Church?
Because the Church is no longer in need of such extra­ordinary testimony to the truth of her teachings. Thus St. Augustine writes: "He who in the face of the conversion of the world to Christianity demands miracles, and strives to doubt those which have been wrought in favor of this most wonderful change, is himself an astonishing miracle of irrationality and stupidity;" and St. Chrysostom says: "The question is sometimes asked: How happens it there are not so many miracles now‑a‑days? The answer is, because the knowledge of Christ is propagated all over the earth, and the Church is like a tree which, having once taken deep root and grown to a certain height, no longer needs to be carefully watered and supported."
Posted by Paul Stramer at 7:49 AM