Instruction on the Second Sunday After Pentecost

INTROIT The Lord became my protector, and He brought me forth into a large place: He saved me, because he was well pleased with me. (Ps. XVII.) I will love Thee, O Lord, my strength: the Lord is my firmament, and my refuge, and my deliverer. Glory be to the Father and to the Son, and to the Holy Ghost, as it was in the beginning, is now, and ever shall be, world without end. Amen.
COLLECT Make us, O Lord, to have a perpetual fear and love of Thy holy name; for Thou never failest to help and govern those whom Thou dost establish in Thy steadfast love. Through our Lord Jesus Christ Thy Son, who liveth and reigneth with Thee, in the Unity of the Holy Ghost, God, world without end, Amen.
EPISTLE (I ,John III. 13-18.) Dearly beloved, Wonder not if the world hate you. We know that we have passed from death to life, because we love the brethren. He that loveth not, abideth in death; whosoever hateth his brother is a murderer. And you know that no murderer hath eternal life abiding in himself. In this we have known the charity of God, because he bath laid down his life for us: and we ought to lay down our lives for the brethren. He that hath the substance of this world, and shall see his brother in need, and shut up his bowels from him, how doth the charity of God abide in him? My little children, let us not love in word nor in tongue, but in deed and in truth.
EXPLANATION People who are really pious have always something to suffer from the wicked world, as, Jesus foretold, but they do not cease to love their persecutors as their best friends, and are ready, if necessary, to give their life for ,their enemies, as Christ did. Thus should all Christians act; for the love of our neighbor and even of our enemies is a universal command, a law that binds all; it is the life of the soul. Hatred deprives the soul of this life and makes man a murderer, because hatred is the beginning of murder, and often ends in homicide. By love we know the true Christians. (John. XIII. 35.) St. John even considers love the certain sign of being chosen for eternal life, when he says: We know, we have passed from death to life, because we love the brethren. Alas! how few will be chosen from among the Christians of to-day, because there is so little love among them! Empty compliments, assurances of friendships &c. love appears only in words, only on the tongue; and such idle, ephemeral, worthless love is found everywhere in this world; but that which is love in truth and reality, which shows charity to the suffering, how rare it is! and yet only to this love is promised eternal life, because it alone rests on the love of God. 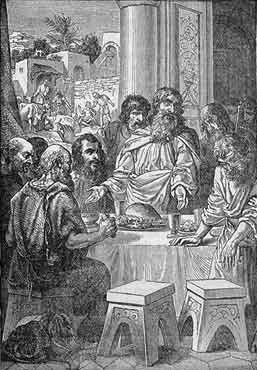