INSTRUCTION ON THE FIRST SUNDAY AFTER EASTER, CALLED DOMINICA IN ALBIS

Why is this Sunday called Dominica in Albis or White Sunday?
Because on this day the neophytes laid aside the white dress which, as emblem of their innocence, they received on Holy Saturday, and put on their necks an Agnus Dei, made of white wax, and blessed by the pope, to remind them always of the innocence for which they were given, and of the meekness of the Lamb Jesus. For which reason the Church sings at the Introit:
INTROIT As newborn babes, alleluia: desire the rational milk without guile. Alleluia, alleluia, alleluia. (I Pet II. 2.) Rejoice to God our helper: sing aloud to the God of Jacob. (Ps. LXXX.) Glory, &c.
COLLECT Grant, we beseech Thee, Almighty God, that we, who have completed the paschal solemnities may, through Thy merciful bounty, ever retain them in our life and conversation. Through.
EPISTLE (I John V. 4-100.) Dearly Beloved, Whatsoever is born of God overcometh the world; and this is the victory which overcometh the world, our faith. Who is he that overcometh the world, but he that believeth that Jesus is the Son of God? This is he that came by water and blood, Jesus Christ: not by water only, but by water and blood. And it is the spirit which testifieth that Christ is the truth. And there are three who give testimony in heaven: the Father, the Word, and the Holy Ghost: and these three are one. And there are three that give testi­mony on earth: the spirit, and the water, and the blood: and these three are one. If we receive the testimony of men, the testimony of God is greater: for this is the testimony of God, which is greater, because he hath testified of his Son. He that believeth in the Son of God, hath the testimony of God in himself.
INSTRUCTION As in his gospel, so in his epistles, and especially in this, St. John proves the divinity of Christ which had been denied by some heretics. He says that Christ had come to purify all men from sin by water and blood, that is, by. His blood shed on the cross for our rec­onciliation, and by the water of baptism to which He has given the power, the divine effect of His blood, and has thus proved Himself the divine Redeemer. This His divine dignity is attested by the Holy Ghost who lived in Christ and worked through Him with His fulness, and when sent by Him after our Lord's Ascension, produced most won­derful effect in the apostles and the faithful. As now on earth three, the Spirit, water, and blood, give testimony of Christ's divinity and agree in it, so also in heaven three, the Father, who calls Him His beloved Son, (Matt, III. 17.) the Word, or the Son Himself, who wrought so many miracles, the Holy Ghost, when He descended upon Him at the baptism in the Jordan, (Luke III. 22.) give testimony of His divinity, and these also agree with one another in their testimony. If Christ is truly God, then we must believe in Him, and this faith must be a living one, that is, it must prove fertile in good works, and this faith conquers the world by teaching us to love God above all, to despise the world with its pleasures, and to overcome it by indif­ference. Let us strive to have such faith, and we shal overcome all temptations and gain the eternal crown.
ASPIRATION O Lord Jesus! strengthen me by a lively faith in Thy divinity, so that I may not suc­cumb in the spiritual combat against the world, the flesh, and the devil, and be eternally lost. 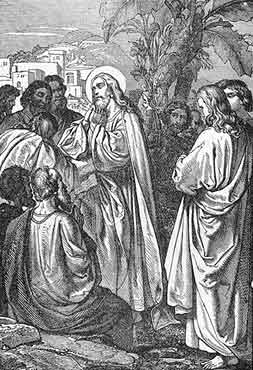