Have We Finally Found Francesco Bernini? And John H. Durham?

As I told you before, World War II was planned at a shareholder's meeting of the Royal Bank of Scotland in 1877. They had come together to form a series of plans for future decades of "world government administration", and a series of gigantic fraud schemes, complete with their inevitable results--- like World War II.
These plans, delineated, decade by decade, a program based on these principles:
(1) Blame your adversaries for what you are doing yourselves; (2) Blame the victims especially; (3) Impersonate yourselves as being your enemy or as representing your enemy-- then do your dirty work; (4) Follow the Hegelian Dialectic --- cause a problem, present your solution, then reap the rewards; (5) Use Divide and Conquer along racial, religious, and whatever other lines can be drawn; (6) Every lie is a prayer; (7) Use False Flags and False Narratives to drive the sheep; (8) Use Good Cop v. Bad Cop authority figures and political leaders to guarantee retention of leadership. (9) Educate only those you can control; (10) Use blackmail to control; (11) Borrow or leverage as much money and other assets as you can; (12) Insure your Creditors with life insurance policies, and then kill them when it's time for you to pay up; (13) Seize upon the former creditor's property to pay off your debts to secondary creditors and use the rest of the money and actual assets you borrowed (and which you no longer have to pay back) to curry favor with new victims (China); (14) cover your tracks, leaving your victims and their families to pay you for your "service" to them.
There, in a nutshell, is the modus operandi of the world-ruling junta which has brought the entire Earth to the brink of ecological and economic destruction. This has been their program since the end of the Roman Empire.
When they could no longer rule by force, they ruled by deceit.
The meeting of the RBS shareholders to set up World War II included an odd mix of Scottish Calvinists and Roman Catholic Clergy, including our Mystery Man, Francesco Bernini, a Papal Legate --- who didn't exist prior to the meeting and who disappeared forever afterward.
Poof!
On February 28, 2021, John H. Durham --- or at least his character -- disappeared from history, too.
There is good reason to think that John H. Durham, the federal prosecutor who was supposed to investigate the whole Russia-gate scandal, is a fictional person just like Francesco Bernini.
There is a bio and reference to "38 years as a Federal Prosecutor in Connecticut" and an educational history, claiming that he is a graduate of Colgate University and University of Connecticut Law School, etc., and less than half a dozen photos --ever-- of John H. Durham.
Then in February of this year, this brief press announcement from the Mystery Man:
https://www.justice.gov/usao-ct/pr/us-attorney-durham-announces-departure-office
How difficult is it, really, to manufacture such a person?
Especially if you have the resources of the Secret Service to do it?
It's as easy as making up a character in a novel.
You find or make some thread in reality--- a name: Francesco Bernini, John H. Durham, Felicia Sparks....
You attach the name to some plausible provenance--- a place: Florence, Italy or Litchfield,Connecticut, or Akron, Ohio.
You tell a gullible Registrar that you represent the Federal Government (which you do in this case, though we aren't saying which one) and that this is a matter of "National Security" or you find one who is simply a rat and grease their palm to enter "John H. Durham" as a graduate of the Class of 1975..... dummy up a class record with the help of expert forgers, and voila.
The only contrary evidence will be the curious absence of all photos and references to a John H. Durham in old school yearbooks, and the equally curious absence of remembrance on the part of his schoolmates.
And who is going to be motivated enough to trace back all the members of that year's graduating class at Colgate, University, or go looking for those yearbooks?
You can also find some old photos of a dead person or use a dead person's name to begin with to furnish all the above plausible details. Otherwise, how hard is it to hire an unknown out-of-work actor these days? Tell him it's a matter of "National Security".....
The Evil Ones who have been working their "magic" since the days of Simon Magus are, after all, tricksters, magicians, and illusionists.
They manufactured the office of "Bishop of Rome" out of thin air, which is true, even if many Catholics will be aghast to learn that Saint Peter was never Bishop of Rome.
They still manufacture and give value to little tokens made of worthless metals, plastic cards, and pieces of paper.
They made an entire 747 "disappear" in Pennsylvania.
And another one vanished at the Pentagon in 2001.
Both had a maximum take-off weight of 450 tons.
Poof! Just like Francesco Bernini.
Compared to all that, manufacturing and manipulating a character called John H. Durham is easy as saying three Hail Marys.
So where is John H. Durham? We have searched high and low.
And we are not alone. His disappearance, together with his "Report" has been a cause of concern for many people worldwide, including President Trump:
Look for: "Does John Durham Exist? A MAJOR Update To My Reporting From President Trump Himself!"
But then, we are presently living in a world where an entire worldwide Flu Season has disappeared, too:
Between 65,000 and 165,000 (in round numbers) die each year in this country as a result of influenza; the majority of these deaths, 40,000 to 80,000, occur during "Flu Season" that begins in late fall and runs through the winter.
People everywhere will be amazed and happy to learn that this year, the Flu Season didn't happen. Only 523 deaths due to influenza were recorded.
Poof! Flu Season, like Francesco Bernini, and John H. Durham -- and Durham's Report --- all just vanished. Like magic.
Of course, the overall number of deaths due to respiratory failure stayed rock bottom the same as ever.
http://annavonreitz.com/nchscdcdata.pdf 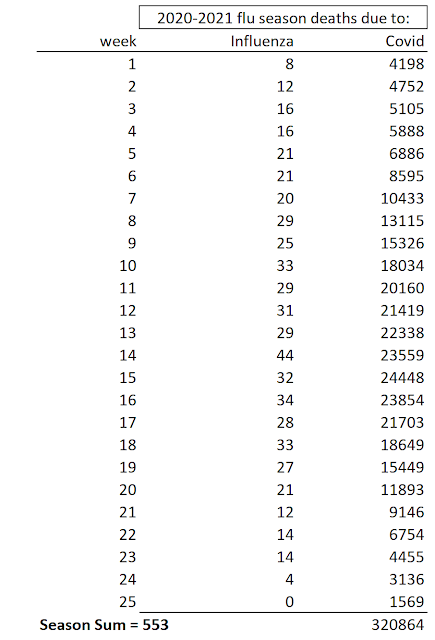