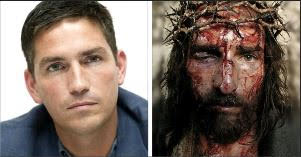 "Christ" Denounces "Collaborator" Newbishops for Destroying the Catholic Church. Passion of the Christ Title Role Actor Calls Newbishops "Collaborators in Persecution"
From: The TRADITIO Fathers
http://www.traditio.com/comment/com2009.htm
James Caviezel, who played the title role in Producer-director Mel Gibson's 2004 blockbuster "The Passion of the Christ" Denounced in a Television Interview Newchurch'sBishops as "Collaborators" in persecuting the Catholic Church. He called the newbishops "flat out Judases" and condemned newchurch pastors, presbyters, and newbishops for "lying right over" in the face of the destruction of Catholicism.

In a September 17, 2020, Fox News television interview, James Caviezel, who played the title role in the 2004 blockbuster, The Passion of the Christ, denounced "collaborator" Newbishops for persecuting the Catholic Church. Caviezel is a traditional-bent actor who attended an independent Traditional Latin Mass every day while filming The Passion, which Producer-director Mel Gibson provided on set for the cast.

Caviezel denounced what he called "lukewarmness," stating: In Newchurch "one can’t tell the difference between a pr[esbyter], a [New]bishop, or a politician.... They are flat out Judases, okay? Or they're Pontius Pilates, or they're the Pharisees, okay? Christ has a very special place for them, and they know it.” Caviezel also reproved "lukewarm" Catholics, what others have termed CINOs (Catholics in Name Only), who have allowed the institutional Church to be destroyed.

Caviezel has a new film just out, "Infidel," which he described as "not some candy-ass Christian stupid film, but rather one about what is really going on today with widespread persecution of Christians in the Middle East, even in the West. He condemned Newchurch pastors, presbyters, and Newbishops for "lying right over" in the face of the destruction of Catholicism, allowing their churches to be burned down all over the world.

Caviezel also condemned politicians' unconstitutional closing of churches in the West in order to deprive people of their Faith. He said that he personally knows of Newchurchers who have committed suicide as a result, because the Newbishops won't stand up to politicians, but are "collaborators" in the "persecution." Caveziel said that his own country, the United States, is a perfect example of such persecution. [Some information for this Commentary was contributed by Fox News.]

True Catholics, what Caviezel is saying is right out of the Bible, where Christ through St. John the Apostle vehemently condemns the "lukewarm" with these words: "But because thou art lukewarm and neither cold nor hot, I will begin to vomit thee out of my mouth" (Apocalypse 3.16). No wonder Newchurch is suffering the cataclysm prophesied by St. John for such people.
Found Here:  https://youtu.be/k5yGFfOX2yw
--------------------------
Editor's note: On this blog I have been saying for many years that this has been going on since the Vatican II council in the early 1960s. Many have agreed with my assessment that the Novus Ordo in the Vatican is now a new and false religion, and that the so called popes, since 1958, after the death of Eugenio Pacelli (Pope Pius XII) have all been Anti-popes, not Catholics at all, having embraced heresies. We are not alone. Thousands of Catholics accross the world have come to the conclusion that we must adhere to tradition and walk away from the modernism as an act of Loyalty to Christ and what he taught when he walked this earth.
https://novusordowatch.org/
http://www.calefactory.org/tea-onetruechurch.htm
http://www.calefactory.org/tea-churchorthebible.htm
http://www.calefactory.org/tea-apostolicity.htm
http://www.calefactory.org/tea-cat-contents.htm
https://www.wcbohio.com/
Where we go:   https://www.ihm-church.org/

To watch the whole series go here:  https://www.wcbohio.com/videos/pascendi-series
Posted by Paul Stramer at 8:00 AM