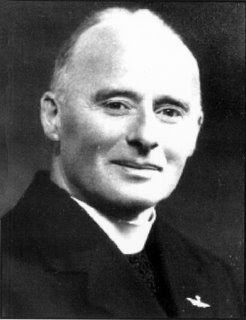 Modern society is the product of a Cabalist (satanic) conspiracy against God & man.

No one has demonstrated this better than Denis Fahey (1883-1954) in his book
"The Kingship of Christ and the Conversion of the Jewish Nation."
Marie Henrie introduces us to the man and his work.Fahey wrote, "These forces are three in number, one being invisible, the other two visible. The invisible host is that of Satan and the other fallen angels, while the visible forces are those of the Jewish Nation and Freemasonry."

From Dec 25, 2010
By Marie Henrie
(for henrymakow.com)
Born in Ireland on July 3, 1883, Denis was the youngest of three sons of the devout Catholic couple Timothy and Brigit Fahey. An avid reader with a keen intellect, he was educated by the Holy Ghost Fathers.
Denis Fahey joined their Order in 1900 at age 17 and was ordained to the priesthood in Rome in 1910. 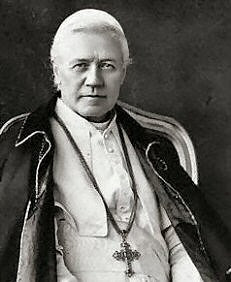 Fr Fahey studied world history in depth while in Rome, and analyzed the push to "Modernism" being imposed upon society. Undoubtedly he was influenced by the struggles of then Pope Pope Pius X (left) whose writings included: Syllabus Condemning the Errors of the Modernists (Lainentabili Sane), Modernism (Pascendi Dominici Gregis) both in 1907, Our Apostolic Mandate (On the "Sillon") in 1910 and The Oath Against Modernism 1910. Fr Fahey realized that the Pope was battling the stealth philosophy of Modernism, which is Organized Naturalism.
Organized Naturalism can be more clearly understood as the foundation of Freemasonry. Naturalism is a materialist philosophy that rejects the existence of the soul or a universal moral order and purpose (God.) This is Satanism. Fr Fahey studied the Protocols of the Learned Elders Zion and recognized it as the evil blueprint for a New World Order. Mankind is viewed as livestock rather than possessing the unique soul created in the image and likeness of God. For Fr Fahey a Catholic priest, this enemy must be challenged.
Fahey wrote, "These forces are three in number, one being invisible, the other two visible. The invisible host is that of Satan and the other fallen angels, while the visible forces are those of the Jewish Nation and Freemasonry."
(The Kingship of Christ and the Conversion of the Jewish Nation, p. 61)
Quoting the writings of Cardinal Pie of Poitiers, Fr. Fahey wrote:
"Naturalism denies the very existence of revelation. It follows that the inevitable law and the obstinate passion of Naturalism is to dethrone Our Lord Jesus Christ and to drive Him from the world. This will be the task of Anti-Christ and it is Satan's supreme ambition.
(The Kingship of Christ and Organized Naturalism. Pg. 3)

He also wrote,"Modern History since 1789 is, to a large extent, the account of the domination of state after state by the naturalistic supra nationalism of Freemasonry, behind which has been steadily emerging the still more strongly organized naturalistic supra nationalism of the Jewish Nation."
(The Kingship of Christ and Organized Naturalism)
http://www.traditio.com/fah.htm
Fr Fahey was smeared as an "anti-Semite", the stop-think phrase used by those who refuse to face mankind's dire predicament.
The argument rages on today whenever anyone in Catholic circles writes about Fr Fahey.
http://catholicism.org/catholic-world-of-fahey.html
"Two nations for whom Fr. Denis had a deep love were his own nation and the nation that gave birth to the Messiah, the Jewish nation. Loving Christ and His mother as he did, Fr. Fahey was deeply hurt by the calumny that he was anti-Semitic in any way."
http://www.catholicapologetics.info/apologetics/judaism/fahey.htm
FREEMASONRY, CABALISM FOR GENTILES

In 1950, Fr Fahey republished a work by Msgr. George F. Dillon, DD, " The War of Anti-Christ with the Church and Christian Civilization." After reading a summary, Pope Leo XIII approved the work and funded the publication of an Italian version. He openly denounced the collaboration between the Bavarian Illuminati and the Freemasons, as well as the collaboration between Lord Palmerston and the Carbonari. He was also critical of the Alta Vendita document, Napoleon Bonaparte's supposed ties with the Masons, and the secretive character of the Fenian organization." 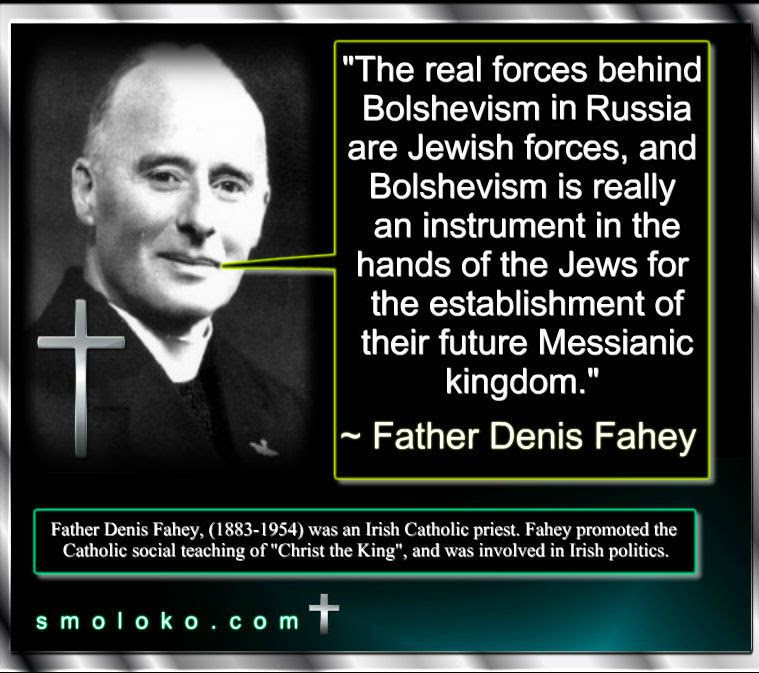 The republished book was entitled, Grand Orient Freemasonry Unmasked as the Secret Power Behind Communism.,1950.
"The central theme of the book alleges that atheistic Illuminism, through the infrastructure of Grand Orient Freemasonry, driven by the ideology of the philosophes laid the foundations for a large scale, ongoing war against Christendom in general and the Catholic Church in particular. The document claims that this had been manifested primarily through manipulating the outbreak of various radical liberal republican revolutions. Particularly those which are focused on atheism or religious indifferentism in their anti-Catholicism."
As his Wikipedia entry shows, Father Fahey, who died in 1954, was a tireless crusader for God. Fahey promoted the Catholic social doctrine of Christ the King and was involved in Irish politics through his organization Maria Duce.
"Fahey firmly believed that "the world must conform to Our Divine Lord, not He to it." This often saw Fahey in conflict with systems which he viewed as promoting "naturalism" --particularly Communism, Freemasonry and rabbinic Judaism."
He left behind a large body of work that upheld his view that mankind indeed is under siege by powerful Satanists.
---
Related: "The Popes Against the Jews"
Father Denis Fahey Archive
Posted by Paul Stramer at 9:17 PM