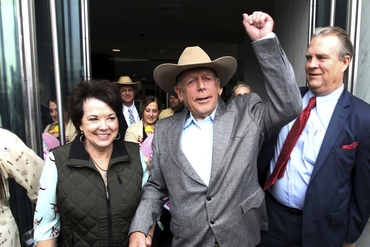 Lost in the tumbling headlines of a busy week was a ruling that reminds us the corruption of federal justice is not confined merely to a few politicized bureaucrats monkeying around in the Hillary and Trump investigations. On Monday, US District Court Judge Gloria Navarro dismissed with prejudice (against the Justice Department) all charges against Cliven Bundy and his sons. If you've forgotten the Bundys' stand-off with the Feds in Nevada, here's how National Review's David French summarizes it:

On one side was a collection of dangerous, out-of-control armed men who were deliberately provocative, prone to saying unhinged things in a single-minded quest to destroy their enemies, and who lied time and again to cover their misdeeds.
On the other side was Cliven Bundy.

That's an entirely reasonable characterization given Judge Navarro's finding that "the universal sense of justice has been violated" and the government is guilty of "a deliberate attempt to mislead" the court. "The government's conduct in this case was indeed outrageous," she ruled. "There has been flagrant misconduct, substantial prejudice and no lesser remedy is sufficient" - other than a dismissal "with prejudice" to prevent the Justice Department embarking on new ways to screw the Bundys over for another few years. (They're already spent most of the last two in jail.)