At the Introit of the Mass the Church prays for the peace which God has promised by His prophets:
INTROIT Give peace, O Lord, to them that patiently wait for thee, that thy prophets may be found faithful: hear the prayers of thy servant, and of thy people Israel. (Ecclus. XXXVI. 18.) I rejoiced at the things that were said to me: we shall go into the house of the Lord. (Ps. CXXI. 1.) Glory be to the Father and to the Son, and to the Holy Ghost, as it was in the beginning, is now, and ever shall be, world without end. Amen.
COLLECT O Lord, inasmuch as without Thee we are not able to please Thee, let Thy merciful pity rule and direct our hearts, we beseech Thee. Through our Lord Jesus Christ Thy Son, who liveth and reigneth with Thee, in the Unity of the Holy Ghost, God, world without end, Amen.
EPISTLE (I Cor. I. 4-8.) Brethren, I give thanks to my God always for you, for the grace of God that is given you in Christ Jesus, that in all things you are made rich in him, in all utterance and in all knowledge: as the testimony of Christ was confirmed in you, so that nothing is wanting to you in any grace, waiting for the manifestation of our Lord Jesus Christ who also will confirm you into the end without crime, in the day of the coming of our Lord Jesus Christ.
EXPLANATION St. Paul shows in this epistle that he possesses true love for his neighbor, because he rejoices and thanks God that he enriched the Corinthians with different graces and gifts, thus confirming the testimony of Christ in them, so that they could without fear expect His arrival for judgment. - Do thou also rejoice, with St. Paul, for the graces given to thy neighbor, for this is a mark of true charity. 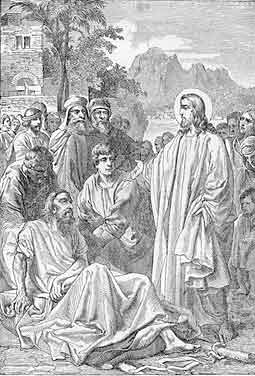 GOSPEL (Matt. IX. 1-8.) At that time, Jesus entering into a boat, passed over the water, and came into his own city. And behold, they brought to him one sick of the palsy lying in a bed. And Jesus seeing their faith, said to the man sick of the palsy: Be of good heart, son; thy sins are forgiven thee. And behold, some of the Scribes said within themselves: He blasphemeth. And Jesus seeing their thoughts, said: Why do you think evil in your hearts? whether it is easier to say, Thy sins are forgiven thee; or to say, Arise, and walk? But that you may know that the Son of man hath power on earth to forgive sins (then said he to the man sick of the palsy): Arise, take up thy bed, and go into thy house. And he arose, and went into his house. And the multitude seeing it feared, and glorified God who had given such power to men.
EXPLANATIONS

I. Those who brought this sick man to Christ, give us a touching example of how we should take care of the sick and help them according to our ability. Christ was so well pleased with their faith and charity, that He cured the man sick of the palsy, and forgave him his sins. Hence we learn how we might assist many who are diseased in their soul, if we would lead them to God by confiding prayer, by urgent admonitions, or by good example.
II. Christ did not heal the man sick of the palsy until He had forgiven him his sins, by this He wished to teach us, that sins are often the cause of sicknesses and other evils, by which we are visited, and which God would remove from us if we were truly repentant. This doctrine Jesus confirmed, when He said to the man, who had been sick for thirty-eight years: Sin no more, lest some worse thing happen to thee. (John V. 14.) Would that this were considered by those who so often impetuously demand of God to be freed from their evils, but do not intend to free themselves from their sins, which are the cause of these evils, by a sincere repentance.
III. "He blasphemeth." Thus thought the Jews, in their perverted hearts, of Christ, because they believed that He in remitting the sins of the sick man, usurped the rights of God and thus did Him a great injury; for it is blasphemy to think, say, or do any thing insulting to God or His saints. But these Jews did not consider that they by their rash judgment calumniated God, since they blasphemed Christ who by healing the sick man, and by numerous other works had clearly proved His God-head. If Christ so severely reprimanded the Jews, who would not recognize Him as God, for a blasphemous thought against Him, what will He do with those Christians who, though they wish to be adorers of God and His Son, nevertheless, utter blasphemies, curses, and profanations of the holy Sacraments?
IV. When Jesus saw their thoughts, He said: Why do you think evil in your hearts? This may be taken to heart by those who think that thoughts are free from scrutiny, and who never think to confess their evil and shameful thoughts. God; the most Holy and most just, will, nevertheless, not leave a voluntary unchaste, proud, angry, revengeful, envious thought unpunished, any more than an idle word. (Matt, XII. 36.) The best remedy against evil thoughts would be the recollection that God who searches the heart sees them, and will punish them.

PRAYER How great, O Jesus! is Thy love and mercy towards poor sinners, since Thou not only forgavest the sins of the man sick of palsy, but calling him son, didst console and heal him! This Thy love encourages me to beg of Thee the grace, that we may rise from our bed of sins by true penance, amend our life, and through the ways of Thy commandments enter the house of eternal happiness.