About Public and International Notice -- and Obama's Activities

When a President travels abroad there are public meetings and private meetings.  During Obama's trip to Belgium featured in my recent release, the content of the private meeting was secretly recorded.  These are two different audiences.  One private meeting with predominantly Bar Association Members took place before the public meeting with the politicians and bureaucrats predominating.
Mr. Obama was put in power by the Queen's men.  His mission was and is to destroy the fiat currency.  His further mission is to promote monarchy as the only form of government and her son as the king of the world.
Although I allow lots of room for speculation as to the "king's" identity, and personally believe that it may prove to be the Lord Mayor or some other character besides Prince Charles, there is no doubt that pushing a system of oppressive monarchy has been the agenda of these cretins all along.
See the Secret Treaty of Verona as an example.  The cronies that benefit from the feudal system of monarchy always want a king --- and demand it, just as they demanded it of the prophet Samuel.   In this way, they succeed in substituting a man that they control in place of the True God.
Mr. Obama, despite all the efforts to paper over the facts, is a Kenyan.  And there is no real reason that a Kenyan can't serve as the "President" of a commercial corporation anywhere on Earth ---- the necessity of creating a Hawaiian birth record for him was only for public appearances.
So what they are doing is technically "legal" just as describing Abraham Lincoln as "President" of the United States of America, ----Incorporated, was technically legal.  They have made a lot of advances on such puerile deceptions, but it is time they were stopped.
Having a private meeting at the same location and not filming it, and then holding a public meeting and filming it, is just more of the same.
It's time we all woke up.
It's time to realize that with them, the cure is always the killer.  And nothing is as it appears.
----------------------------
See this article and over 3700 others on Anna's website here: www.annavonreitz.com
To support this work look for the Donate button on this website.

This order is all spoken for but call back in a day or three to see if we got all the funds.

We have an order of 500 ounces of our Prospector divisible rounds in stock and available for immediate shipment.  These are brand new, minted in the last week, and shipped to us on consignment from our mint in Utah.  They have never done that before, which gives you an idea of our reputation with that mint.  We have them in our possession and they will be shipped from Montana.

They are a divisible round so you can make change when silver goes to it's true value shortly. 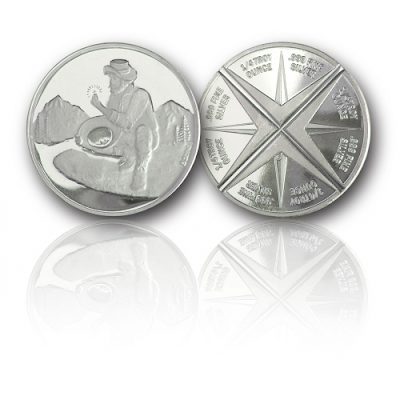 We will be shipping these via UPS Ground and fully insured. You can buy all 500 ounces or any part of these in 100 ounce increments at the price of $29.80 per ounce plus shipping.

The shipping will be calculated once you call us and varies depending on your location.  We only ship to USA States. No out of country orders please.

These won't last long, since the wait time from the mint we use is now 4 to 6 months on new orders.

The last time we sold these the order was taken within 11 minutes.

Payment by cashiers check or wire transfer only. No credit cards accepted on this special sale.

They will ship once we have your funds.