You Are Among the First to Know

A few days ago I told everyone that the "mountain moving" has begun.  So it has.

Most of the criminality that has infested this country has been built around one central lie --- the idea that our government of the people, by the people, and for the people was in "interregnum" --- a polite fancy way of saying "on pause", not functioning, in-between periods of activity and leadership--- for the past 150 years.

When a Pope dies and the conclave of Cardinals come together to choose a new leader, the Holy See is in "interregnum".

So the rest of the world has, as Karen Hudes said months ago, considered our lawful government to be "in interregnum".

We, the sovereigns of the land jurisdiction of The United States of America might come back and might not.  Meantime, our servants running the Territorial United States (military) and Municipal United States (Washington, DC) settled in for a nice long session of eating our food and drinking our wine and sleeping in our beds and generally running amok with our credit cards.

That presumption can now no longer stand.

By their own rules, the cards have been called.  And they lose.

Here is the document Anna referred to as an attachment in the announcement.
The first and second are page 1 and 2 of the whole document, and the third link is the last page of the entire document.

Email ThisBlogThis!Share to TwitterShare to FacebookShare to Pinterest
Labels: Among the first to know, Anna von Reitz

I am not sure why I have to address this topic at this time, but it is apparent from the number and volume of references and questions coming at me from all sides that such a public discussion is necessary.

People need to know what "Morning Star" in the Bible is about and to have some resolution in their minds as to why both Satan and Jesus are referred to with these words.

The Morning Star, also known as the Dog Star, is the brightest star in the heavens.  It is part of a star complex that is more scientifically known as Sirius B.

The Latest New Ad for Anna 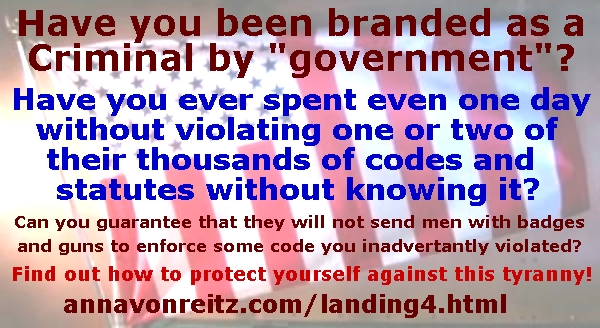 Here is the link:  http://www.annavonreitz.com/landing4.html