Accept All Gifts. Waive All Benefits

People always want simple Silver Bullet answers to everything.  Those are in short supply, but there are a few such cures.
One of the Silver Bullets that can and should be used to defend yourselves is, "I accept all gifts and waive all benefits."
That simple phrase puts the nail in the heart of all the adhesion contracts that can be thrown at you, everything from Social Security to birth certificates and Driver Licenses and Marriage Licenses, CARES Act Payments masquerading as bankruptcy settlements, and all the rest of the presumptions, assumptions, and suppositions that go with them.
Poof.
What's an "adhesion contract" you ask?  It's basically an illegal contract that some nogoodnik is trying to attach to you.
The classic example is the unwanted magazine subscription.  Free three month trial.  And if you continue to accept delivery the fourth month, you just bought a two year subscription to "Fanny Pack", plus a bonus of six more magazine subscriptions for the low, low price of only $19.95 each..... and just look at the wonderful periodicals you receive with this offer?  Cake Decorating Monthly, Fat Cats (about overweight felines), Motoring Without Wheels (a journal for slightly confused hiking  enthusiasts).....Field and Buffet (a magazine about vegetables you never heard of)....
An adhesion contract sells you crap you don't want or need and obligates you to do things that you don't want to do.  And that is the whole point of it.
If you stop a moment and think about it, it is easy to recognize a Driver License as an adhesion contract --- 90% of us aren't actually drivers, don't use the public roads for any commercial purpose resulting in private profit, our automobiles aren't really "motor vehicles" as defined by any Motor Vehicle Code, either, and don't really have to be "registered" --- but the vermin coerce you into their jurisdiction under color of law and the proof of your obligation and status as a "resident" in their jurisdiction is what they demand from you the moment they illegally detain you under pretense that there is an "emergency" going on: the Driver License they gifted you with for only $49.95, plus shipping and handling.
Let's not forget the free Cap Snaffler.
So, when you receive an earnings dividend from a retirement insurance account in the Social Security program that you paid into and (in)vested in, is it a dividend, a gift, or a benefit?
It's an iffy trick question, because while you paid for a portion of it, your employer paid for part of it, and the Federales contributed tax shelters to it, so at the end of the day, a Social Security check can be considered all three, but from the legal perspective, the only correct answer is --- it's a gift.
It has to be a gift, because if it isn't a gift, it's evidence of crime against you and your employers, both.
So, naturally, if we don't want to get into a big dogfight with our Territorial Employees, we accept all their gifts. That Driver License in your pocket?  It's a gift.  The clearinghouse certificate masquerading as a "Birth Certificate"?  It's a gift. Your Federal Employees gave all this stuff to you. Free gratis.
How nice of them, right?
So you claim it was given to you as a gift, and you accept it as a gift.  And because you accept it as a gift --- not a benefit --- it comes to you with no strings attached. The adhesion contract loses its glue.
Obviously, you are not responsible for what some fictional Territorial or Municipal person might do, once you realize that JOHN RAYMOND SEACORD isn't you.
But why waive all benefits?  Doesn't everyone want to be the beneficiary?  Judging from the number of people who claim to be beneficiaries of one thing or another, it's the second most popular profession in the world, but....
No, in this case, it literally is more blessed to give than to receive. The position of power in every case is that of Donor, not Beneficiary.
A "benefit" is a payment or trade or gift made in equitable consideration of dependency contracts that you don't want to be part of.
You don't want to be misidentified as a Federal Dependent and suffer all the obligations that that political status entails, so you don't want to have or hold onto any "benefits" --- which is why you waive them as benefits and accept them as gifts.
Aw, isn't it sweet of them to give you all this stuff?  It's almost like Christmas.
Almost.
I can hear my Sister, Em, saying, "My Lord, is there any end to this double-speak?"
We are, unfortunately, surrounded by a sea of it, thanks mainly to the members of the Bar Associations, but take heart. You can de-fang claims of contractual obligation and dependency, both, with just a few simple words: "I accept all gifts and waive all benefits."
----------------------------
See this article and over 2800 others on Anna's website here: www.annavonreitz.com
To support this work look for the PayPal buttons on this website.
How do we use your donations?  Find out here.
Posted by Paul Stramer at 10:47 PM 8 comments:

A Change in Mindset

Refute this if you can, but I bet you can't.

JUST IN FROM A FRIEND OF MINE IN VIRGINIA:

This is a forward from a High School friend who’s married to a lawyer and works for a law firm.  What do you think????

info from some of the lawyers from my group:

"Ok - in a nutshell:
This is going to the Supreme Court where they will rule that the election is invalid due to fraud or mistakes on a countrywide scale.  It will go one of two ways:  either they will rule that all the unconstitutional mail-in ballots will be removed and the states ordered to recount without them or they will simply rule the election is invalid due to mass voter fraud and at that point, it will be sent to the congress and senate for a vote.  This is where it gets good.  The house/congress votes on who the President will be. It has nothing to do with what party has power. Every state gets one vote and 30 States are held by Republicans and 19 by Democrats. They have to vote down party lines - they have no choice due to the 12th Amendment of the Constitution - and the Senate votes for the Vice-President where a similar event will take place.  This is The law.  This is why the Democrats are so mad at Nancy Pelosi. This will all happen in January. The only way President Trump won’t be President is if he concedes the election and that will never happen.   So stop watching the fake news and don’t let your heart be troubled and live your life knowing this will all work out.
President Trump will remain President.
I have researched all of this and it is Fact!
Another fun fact:  they call Gore the President Elect for 30 days in 2000
until the courts ruled against him and declared Bush the winner.
And two people that were part of that decision were none other then the new Supreme Court Justices, Brett Kavanaugh and Amy Coney Barrett.
Why do you think the Democrats tried so hard to keep them from being confirmed?"

"THERE IS A REMEDY AT LAW FOR EVERY PROBLEM; and any inference with the lawful use of a remedy is permission to create other remedies at law."

The Map They Don't Want You To See

This will get your attention. See this map full size to get the true picture. Remember that 6 of the 7 State legislatures are Controlled by Republicans.

The map that the media refuses to show.
Ivan@Raiklin
Current state of the 2020 Presidential Election:
Trump 232
Biden 226
80 electoral votes across 7 states in dispute. All disputes must be resolved by these State Legislatures by December 14th regardless of audits, recounts, lawsuits. 6 of those legislatures are majority Rs. 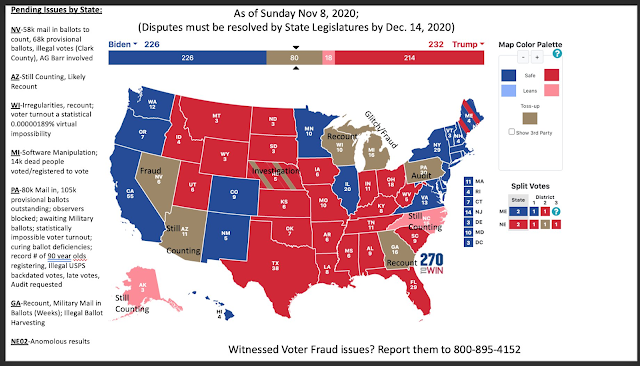 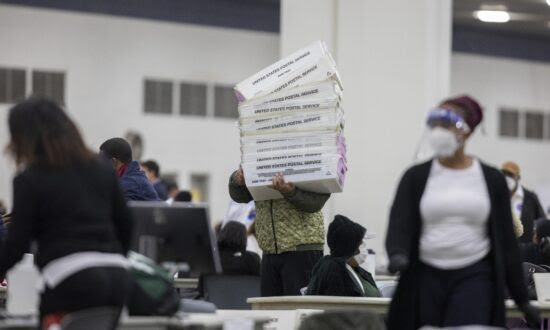 More than 10,000 people confirmed or suspected dead have returned their mail-in ballots to vote in Michigan, according to an ...